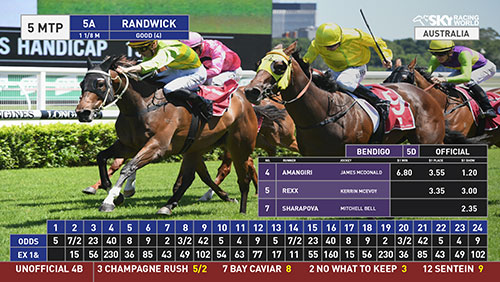 Committed to superior race coverage, both on and off the track, Sky Racing World will supply North American audiences with HD simulcasts of Australian horse racing, seven nights a week. The new HD simulcasts will be available to stream online across 100 digital platforms, including skyracingworld.com.

Features of the accompanying customized graphics package, will include probable payout information for Exacta bets, approximate odds display plus color coding by track to make it easier for handicappers to make their betting decision.

The Australian Autumn Carnival continues on the night of Friday 15th March with the inaugural $5 Million All-Star Mile from Flemington. The All-Star Mile, now the richest turf mile handicap in the world, will feature 14 runners, 10 of which are selected by a public vote.

The G1 George Ryder Stakes, which takes place Friday 22nd March at Rosehill Gardens as part of Golden Slipper Day, also has historic implications as Winx, the world’ best racehorse, will compete in what is likely to be the second-last race of her remarkable career. Winx’s final race is scheduled for three weeks later at the G1 Queen Elizabeth Stakes at The Championships at Royal Randwick on 12th April.

The Championships – Australia's equivalent to the Breeders' Cup – will be held on the consecutive Friday nights of 5th and 12th April (USA date/time) at Royal Randwick and include nine Group 1 races, featuring Australia’s best horses.

Races are available to live-stream and wager at ADW platforms such as TVG, TwinSpires, Xpressbet, NYRABets, WatchandWager, HPIbet, AmWager, and BetAmerica. Fans can also get free access to live-streaming, past performances and expert picks on all races at skyracingworld.com.