No matter how good a team is in college football, they are all going to run into a game or two over the course of a season where they are put to the test, oftentimes by a much lesser opponent. It’s an expected part of the college game, but unlike other sports, those performances can count against them when it comes time for the playoff committee to release their rankings. Winning often isn’t enough, as “style points” are often taken into account, which means that a poor performance against a lesser foe can eventually be seen in the same light as a loss.

The Clemson Tigers have already had one scare this season, a Week 2 win over the Texas A&M Aggies that they barely escaped. The end result of that one was that Clemson was dropped from #2 to #3. Not a dramatic drop to be sure, but a sure sign of the impact that a sub-par performance can have. Clemson will have another tricky one this weekend, as they welcome in a Syracuse team that beat them last year. The Tigers are in as a 24 ½ point favorite, with the point total set at 66 ½. 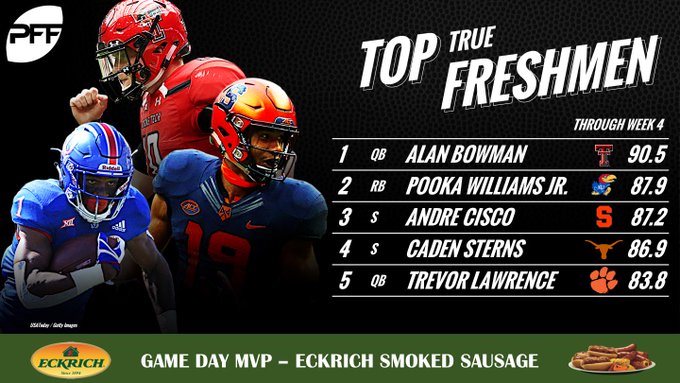 Alan Bowman is the highest-graded true freshman so far this season.

Why bet on the Syracuse Orange?

The Orange sprung one of the upsets of the season in 2017 when they beat the Clemson Tigers, but it is worth remembering that they picked up that win at home against a Tigers team that lost their starting QB to injury in the early going. While that game is not really relevant to what we will see this weekend, this version of the Orange comes into this one on a bit of a roll, having won their opening 4 games, while also going a solid 3-1 ATS.

Other than last season’s victory over Clemson, the Orange have only won once more versus the Tigers in 6 attempts, so another upset here seems a little unlikely. The road has not been kind to the Orange, as they are just 1-7 SU in their last 8 games away from home. They have covered the spread in 4 of their last 6 games with Clemson, though. They are also 6-1 ATS in their last 7 road games.

Why bet on the Clemson Tigers?

While the Clemson Tigers are heading into Week 5 with an unblemished record, they are not really winning in entirely convincing style. There is also a little drama in the program, with starting QB Kelly Bryant deciding to transfer out after being dropped in favor of freshman Trevor Lawrence for this one.

The Tigers have been using both QB’s from the beginning, but this one is going to fall squarely on the shoulders of Lawrence. The Tigers record speaks for itself, winning 21 of the last 23 games SU, but covering has not been their thing. They are just 1-3 ATS this season and just 3-5-1 ATS in their last 9 home games.

The Clemson Tigers finally put together a big winning performance against Georgia Tech last weekend and I think they will now get on more of a roll using 1 QB instead of 2. I like them to win big here, covering the spread in the process.